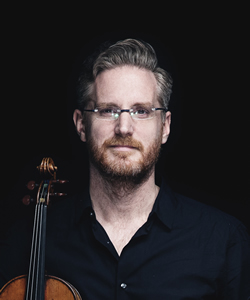 Cristiano Gualco was born in Genoa in 1974. At the age of 7 he begun the study of the violin in a local school. Moving at the age of 15 to the Conservatoire in Genoa he obtained his diploma with top marks. He then moved to London where he took violin postgraduate studies with Krzysztof Smietana at the Guildhall School of Music an Drama. His last solo violin studying period was then with Salvatore Accardo at the Stauffer Academy in Cremona.

In Cremona Cristiano founded the Quartetto di Cremona during an orchestra tour, and begun to tour the world with the quartet since. As first violin of the quartet Cristiano played in halls such as the Wigmore Hall (London), The Konzerthaus (Berlin), the Concertgebouw (Amsterdam), the Società del Quartetto (Milan), Les grand interprètes (Geneva), the Black Diamond (Copenhagen), Metropolitan Museum (New York) as well as many other prestigious venues, and recorded several acclaimed and awarded cds.

Future engagements for next year include the Wigmore Hall and the Carnegie Hall.