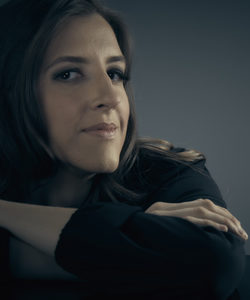 Winner of the 2010 Nadia Reisenberg award for pianists in New York City; laureate of international piano competitions in Mexico, Unites States, Canada and Ukraine; a noted soloist and chamber musician, Vlada Vassilieva has performed at the principal concert venues in America, Europe and Asia. Fulbright Garcia-Robles grantee in 2008; performing fellow by the National Foundation for Culture and Arts in Mexico in 2007; MM at Mannes College for Music in New York City, BM at the Fine Arts Institute of the University of Colima, Ms. Vassilieva is a faculty member at the Music Department of the University of Colima since 2006 and guest faculty at the National Music Conservatory in Mexico. Audience and critics alike appreciate her mature performances, impetuous character and stage presence. 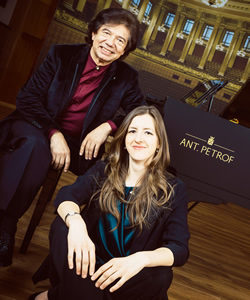 Described by the critics as glowing, flashing and brilliant, Duo Petrof is integrated by Mexican pianists of Russian descent Anatoly Zatin and Vlada Vassilieva, and their performances are acclaimed in America, Europe and Asia. The contagious dynamism that characterizes this duo has set new standards in four-hand performance, surprising audiences by their originality, creativity and success.

Their two-piano version of El Jarabe Tapatío (a Mexican traditional dance) was nominated at the 2016 Hollywood Music in Media Awards. First prize winners of the 2018 United States International Duo Piano Competition and third prize winners at the 2017 On Stage international classical music competition,  they were recognized by the 2016 Mexican Music Awards as the Contemporary-Classical Duo of the Year, receiving the award at Symphony Space in New York City.

Their latest album Duo Petrof plays Ant. Petrof won Silver Medal at the 2017 Global Music Awards, as did their album 88×2, Music for two pianos in 2015 (both on Columna Música). Celebrating their 10th anniversary in 2013 the duo released the CD Idilio Mexicano. That year they were invited to perform the first concert on the newly released Antonin Petrof pianos, in celebration of the 150 years of Petrof Pianos in the Czech Republic. Their recital in Dallas, Texas was named among the best concerts of 2011 by the performing arts magazine Theater Jones.

Founded in 2003, Duo Petrof is an ensemble in residence at the University of Colima in Mexico. Anatoly Zatin and Vlada Vassilieva are members of the Petrof Art Family, the International Academy of Performing Arts and Sciences, and the International Piano Duo Association in Japan. They are proud ambassadors of Petrof Pianos worldwide.