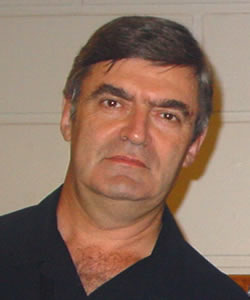 For the past 30 years of his extensive teaching career Viktor Basis has been leading his students all the way from basics to the highest level of musicianship, watching them win top prizes at prestigious national and international competitions all over the world and obtain positions at major orchestras and universities. Mr. Basis has received numerous teaching excellence awards.

Viktor Basis received his professional education at the Gnessin Academy of Music in Moscow where he studied with such renowned musicians as Mikhail Fikhtengoltz (violin), Valentine Berlinsky (string quartet).

Mr. Basis was a founder and the concertmaster of the Divertissement Chamber Ensemble in Orel, Russia, and later, the artistic director of Orel Philharmonic Chamber Orchestra. Mr. Basis’ performances, both as a conductor and a soloist, were broadcasted on Russian National radio and television. He also gave numerous master classes throughout the former Soviet Union. Mr. Basis was the Dean of Orel Music College for eleven years.

Since his arrival in the United States in 1999, Mr. Basis has been on the faculty of the Special Music School and Lucy Moses School at Kaufman Center in New York, and Long Island Conservatory, teaching violin, viola, and chamber music.

For several years Viktor Basis was invited to coach and perform chamber music at the Summer Academy Music Festival in Yuliveska and Suolahti, Finland. He also participated in the Soesterberg Music Festival in Holland and the InterHarmony Festival in Germany.

Viktor Basis currently resides in the New York-New Jersey area with his family.