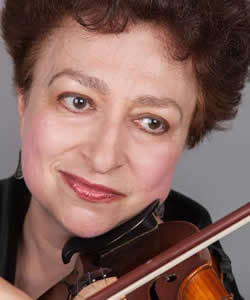 Vera Rubin graduated with a Doctor of Musical Arts Diploma from Boston University, a Master of Music from Gnessin Academy of Music in Moscow, and an Artist degree from Music Academy in Jerusalem, Israel.

Prior to her immigration from Russia, Dr. Rubin performed as a soloist and chamber music musician with the Philharmonic Society of Vladimir, and throughout the Soviet Union.

From 1990 to 1994, Ms. Rubin was a soloist and concertmaster of the Yad Harif Chamber Orchestra in Jerusalem, Israel. She organized and directed the Mendelssohn String Quartet and was recorded for broadcast in Israel, Germany and Czechoslovakia.

In 1994 Ms. Rubin joined the first violins of the New Zealand Symphony. During her tenure with the orchestra, Ms. Rubin became a leader of the Linden Piano Quartet as well as an Adjunct Professor of Performance Violin in the School of Music, Victoria University of Wellington. She led seminars and lectures on various pedagogical themes in universities throughout the country.

In 2001, she moved to Boston enrolling in the Doctoral Program at Boston University, and has since remained in the United States. At present Dr. Rubin performs in the Greater Boston/New England Region. She also teaches performance violin at the NEC Preparatory School and maintains a thriving private teaching studio in Newton. In 2012 she will became a president of the Massachusetts Music Teachers Association.

Apart of the teaching of fundamental skills and variety of musical styles, Dr.Rubin’s  major expertise is in teaching the virtuoso strokes of the bow arm.