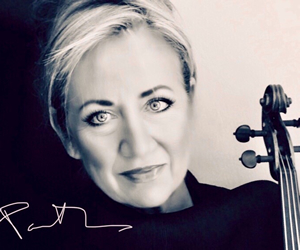 Violinist Paola Tumeo was born in Morocco, where she began her musical studies at the age of five.

She moved to Italy in 1973 and graduated with honors in violin in 1983 at the N. Paganini Conservatoire in Genoa under the guide of the famous soloist Prof. Renato De Barbieri, while at the same time attending the Mozarteum Akademie in Salzburg.

She has attended courses at the Accademia Chigiana in Siena with Franco Gulli gaining a diploma of merit, and for chamber music has studied with Dario De Rosa of the Trio di Trieste and Salvatore Accardo.

In 1985, in piano and violin duo she won the RAI (Italian Radio & Television Corporation) chamber music competition held to celebrate the European Year for Music, that was followed by a series of acclaimed recordings for the Italian company Fonit-Cetra  in 1987: the complete works for duo to celebrate the anniversary of Maurice Ravel and also the sonatas of Cesar Franck and Gabriel Faure’ op.13.

From 1987 to 1991 she was a principal player with the Teatro alla Scala Orchestra in Milan, where she was chosen by Maestro Riccardo Muti,  and since 1988 in the same capacity she has played in Filarmonica della Scala with Muti, Giulini, Sawallisch, Ozawa, Mehta, Maazel, Chung, Gergiev, Bob McFerrin, Tan Dun and Dudamel; in 2004 under Riccardo Muti in several occasions amongst others at Bosra in Syria for the ‘Vie dell’Amicizia’ concerts organised by Ravenna Festival and in the Far East at Suntory Hall (Tokyo), Goyang Concert Hall (Taipei), Dewan Filarmonik Petronas (Kuala Lumpur); in 2006 on a tour in the United Kingdom with Riccardo Chailly.

Paola Tumeo is one of the few soloists in the world invited to play Niccolo’ Paganini’s world famous Guarneri del Gesu’ violin, known as ‘Il Cannone’ (European Gold medal for performance, art and culture 1989; Christopher Columbus Celebrations 1992 and the Renato De Barbieri commemorative concerts in 1993 and in 2001 in Trento).

She has made radio and TV recordings with RAI, ORF (Austria), NHK (Japan), NRK (Norway).

Paola was awarded the Liguria Region prize ‘Promessa del Concertismo’ 1977 and the Prize ‘Vivere Donna’ of the Municipality of Genoa in 1985.

Alongside her activity as a soloist and Guest co-Concermaster at Filarmonica della Scala , she holds Master Classes and advanced courses in Italy and abroad (Conservatoire de Musique J.P.Rameau, Paris; Accademia di Perfezionamento del Teatro alla Scala etc…). Since 1984 Paola is resident professor of violin at the Conservatorio Giuseppe Verdi in Turin.  Since 2010 she is regularly invited to hold Master Classes in Tokio and in Yokohama.

In 2013 Paola Tumeo becomes a Faculty Member of the Cremona International Music Academy and Competition; the Academy includes many world-wide most renowned teachers.

Her very active performance career as soloist and in duo with her pianist Junko Watanabe went along with a passion for teaching which has now received equivalent high-level endorsement to that of her playing. Several students of her achieved considerable international success in Europe, Asia and America, which makes her in much demand world-wide for Masterclasses and as a Member in International Juries.

Paola Tumeo plays a Montanari violin of 1988 and a Yamaha Artida 500S violin, of which she became testimonial in 2012, following the Concertmaster of the Wiener Philarmoniker Rainer Kuchl.