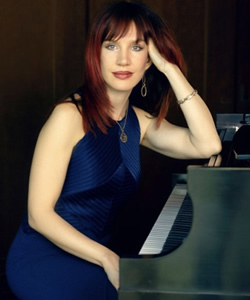 Pianist Olga Rikova Ridgway has delighted audiences internationally with depth of musicality and technical brilliance. Originally from Tashkent, Uzbekistan she graduated from Tashkent State Conservatory and subsequently studied at the Royal Conservatory of Antwerp, Belgium. Moving to Chicago in 2003, she studied at the Chicago College of Performing Arts, receiving an Artist Diploma in piano and Master’s in Piano Performance. Olga received her Doctor of Musical Arts degree from Northwestern University.

She studied with Ludmila Lazar and Alan Chow in Chicago, and Genya Paley in New York City.

Olga has performed as recitalist, chamber player and orchestral soloist in Belgium, Germany, Austria, Italy and throughout the United States. Most recent appearances include performances at the Chicago Cultural Center, Kennedy Center in Washington DC, Merkin Hall in New York City and Carnegie Hall.

In addition to being a performer, Olga has been an active educator. Over the course of 20 years she has served on a faculty at the British School of Chicago, Benedictine University and has taught numerous students in her own private studio.

Currently, Olga serves as a piano faculty at the Music Institute of Chicago.