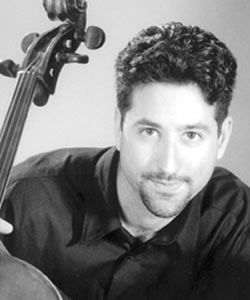 Cellist and composer Michael Bonner has been hailed as “delightful and accomplished” by Richard Dyer of the Boston Globe and “first among near equals” by Bay Windows. As a soloist and chamber musician, he has appeared frequently in such venues as Jordan Hall, the Goethe Institute, and live on WGBH radio. He has performed extensively the cello duo repertoire with NEC pianist Sarah Takagi. He has also been a guest artist of the Boston Chamber Music Society, collaborating with Boston Symphony Orchestra pianist Randall Hodgkinson and BCMS clarinetist Thomas Hill.

An avid proponent of new music, he has premiered works by David Horne, Florentine Mulsant, and Eric Sawyer. Mr. Bonner has recorded Mr. Sawyer’s Duo “Pas de Deux” on a recent Albany Records release, “Strings Works of Eric Sawyer.” Mr. Bonner has also collaborated with such artists as Lynn Chang and Hung-Kuan Chen as a faculty member of the Foundation for Chinese Performing Arts. Mr. Bonner also serves on the summer faculty of the Foundation for Chinese Performing Arts (www.chineseperformingarts.net), where he prepares students from China, Taiwan, and Hong Kong, as well as the Juilliard School of Music, for competitions such as the Junior Tchaikovsky Competition; and where he has taught with such prominent artists as Bion Tsang and Lawrence Lesser. In addition, Mr. Bonner is a member of the faculty of the Longy School of Music in Cambridge (www.longy.edu), where he teaches cello and coaches chamber music. Mr. Bonner is also the Coordinator of the Young Performers Chamber Music Program at Longy. His students have won several competitions, including Junior, Regional, and All-State auditions; belong to the Longy, GBYSO, and NEC orchestras; and have attended such institutions as Juilliard, Harvard, Yale, and MIT. Mr. Bonner has also been invited to judge several competitions, including concerto competitions at Harvard College and the New England Conservatory of Music.