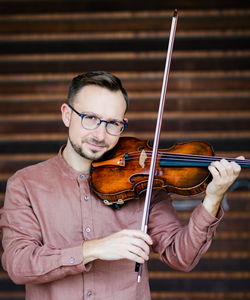 Originally from Ukraine, Liubomyr Senyshyn is a Boston based violinist. Prior to his career in the United States, Liubomyr was a three year member of the K&K Philharmoniker, an Austrian-Ukrainian orchestra that tours throughout Europe. With K&K, he played over 120 concerts per year in the greatest concert halls in Europe: Berliner Philharmonic, Wiener Musikverein and Oslo Opera House. Currently in the states, he performs regularly with Cape Ann Symphony, Boston Chamber Symphony Orchestra, Boston Philharmonic Orchestra, and Symphony Pro Musica.

In addition to his work as a successful orchestral player, Senyshyn is an active chamber musician. For three years he was a member of KLMB String Quartet in Lviv, Ukraine. He is also a founding member and player for both the Glenside Quartet in Boston, MA, and the Temper Trio in Cambridge, MA.

Senyshyn previously participated in the Kiev Music Festival (2009-2010), in the Cremona Music Festival (2016-2019), and has taken master classes with world famous violinists such as Paula Tumeo, Felix Andrievsky, Roberto Cani, Jela Spikova, Ilya Kaler, Benjamin Beilman, Patricia Kopatchinskaja. He was a winner of the 2017 Honors Competitions at the Longy School of Music, received 2nd prize at the International Music Competition for Strings in Cremona, Italy in 2018, and in 2019, he was chosen as a finalist in the Concerto Competition at Longy School of Music. Liubomyr holds a Masters in Music from the Mykola Lysenko Lviv National Music Academy. He also holds a Graduate Performance Diploma, and an Artist Diploma from the Longy School of Music at Bard College in Cambridge, MA under the instruction of Mark Lakirovich. One of his greatest contributions as a student while attended Longy was building a collaborative partnership with Boston Opera Collaborative. He worked with BOC on three major productions – “Opera Bites”, “La Rondine”, and “As One” – between the years of 2016-2019.

Senyshyn maintains an active private teaching studio in the Boston/ area, as well as holds a faculty position at the Sharon Music Academy. Senyshyn started teaching 12 years ago in Ukraine and for the past 3 years has served as a teacher for El Sistema USA in Cambridge, MA and was recently awarded an associate faculty position at the Cremona International Music Academy for the 2021 festival.