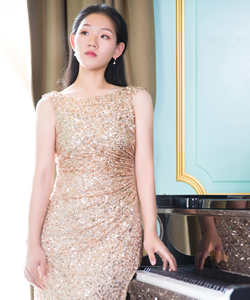 Born in China, Inner Mongolia, pianist Li Wang has established herself as a passionate, sensitive and mature pianist. She began her piano playing at age four. Currently, she pursues the Doctor of Music Art degree in University of Cincinnati (CCM). There, she studies with world famous pianist James Tocco. Prior to this, she received the Artist Diploma in University of Cincinnati, the Master Degree at Roosevelt University and the Bachelor degree at Central Conservatory of Music (Beijing).

In addition to her solo performance, she is also an active chamber musician. She played with her husband, violinist Andrii Isakov, together in the United States, China, Italy and Ukraine. Their 2019 summer performance in Tongliao was broadcasted She also worked with recognized artists Yehuda Hanani, Hengjian Fang, Joseph Genualdi and Vladimir Perlin. She has been invited as a collaborative faculty member in High Peak Music Festival and Cremona International Music Academy.