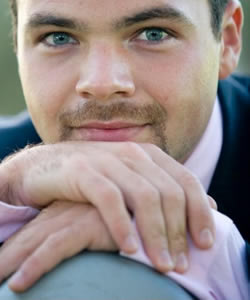 He was awarded with the first prize of the Ima Hogg International Competition in Houston, TX in June 2008

Following in the footsteps of his father, cellist László Mező (cello professor in the Liszt Ferenc University of Music, Cavalier of violoncello, a jury member in major cello Competitions and Festivals and a member of the Bartók Quartet), László Mező has forged a career as a soloist, recitalist, master teacher and chamber musician. He has performed extensively in Europe, Asia and America, appearing in countries such as The United States, Hungary, Romania, Czech Republic, Austria, Germany, Italy, Switzerland, Spain, Croatia, France, Slovakia, Brazil and Japan.

Always eager to pass on his knowledge, László has conducted master classes in Japan, Switzerland and Hungary. In 2008 he was Assistent Teacher at the University of Southern California.

As soloist, László has performed with Maestros Ádám Fischer, Thomas Wilkins, Grant Llewellyn, Zsolt Hamar and Jerzy Swoboda. As chamber musician, he has collaborated in recitals with pianists Gábor Farkas, Márta Gulyás, Piotr Folkert and Balázs Szokolay, violinist Kristóf Baráti, cellist Philipp Muller and the Bartók Quartet. He has also played under the direction of Zubin Mehta and Kent Nagano (among others) as a member of the Bayerische Staatsorchester in Munich.

László Mező holds master degrees from the Liszt Ferenc University of Music in Budapest and the Hochschule für Musik und Theater München. He has also participated in the master classes of Uzi Wiesel, Josef Podhoransky, Othmar Müller, Philippe Müller, Rainer Zipperling, Fenyves Lóránd and Wolfgang Boettcher. In addition to performing and teaching, László recently graduated from the class of Ralph Kirshbaum at the University of Southern California in Los Angeles.

He recently finished his CD-recording of David Popper’s works, including many first recordings with the Hungaroton label.