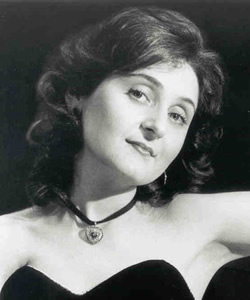 Music critics the world over continue to praise pianist Irina Morozova as a “truly gifted artist who plays with exceptional intelligence, refined musicality, virtual flawlessness of technique, and an impeccable sense of style”.

Irina Morozova made her New York debut with a solo recital at Carnegie Recital Hall in 1996 after winning the Artists International Auditions.

She has given numerous solo recitals throughout the U.S., Russia, and Europe, and made solo appearances with Berlin Radio Symphony Orchestra, South Carolina Symphony, Irving Symphony Orchestra, and the New American Chamber Orchestra, among others. A passionate chamber music player, she has performed in ensembles with members of the New York Philharmonic and Metropolitan Opera orchestras. Her performances were broadcast on Russian radio and TV, BBC, WQXR (New York), ABC (Australia).  She participated in the Film America’s “Music in the 20th Century” TV series. Every summer Ms Morozova teaches and performs at the International Keyboard Institute and Festival at Mannes College. Ms. Morozova was a top prize-winner of the New Orleans, the Frinna Awerbuch, and the San Antonio International Piano Competitions.

Her CD of virtuoso transcriptions of Gershwin works, including a unique recording of the solo version of Concerto in F, was recently released by Samum Publishing.

Born to a musical family, Irina Morozova began her musical studies at the Leningrad Special Music School for Gifted Children and graduated with honors from the Rimsky-Korsakov College of Music where her major teacher was Galina Orlovskaya. Studying with Professor Vladimir Shakin at the Saint-Petersburg Conservatory, she performed in the major concert halls of Saint-Petersburg, Moscow, Kiev, and many other cities in the former Soviet Union.

Ms. Morozova received her Master of Music degree from the Manhattan School of Music where she studied with Dr. Arkady Aronov and where she is a Piano Associate faculty. Since 1995 she has been on the faculties of Mannes College of Music and the Special Music School at Kaufman Center in New York.