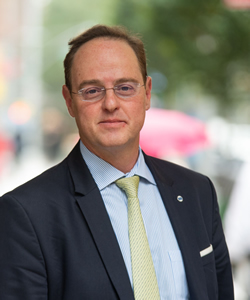 Praised for his “kaleidoscopic” playing by the New York Times, pianist Igal Kesselman is one of today’s most forward-thinking performers and music educators. After making his American debut with the Washington Chamber Symphony at the Kennedy Center, he has performed throughout the country in such venues as Alice Tully Hall, Symphony Space and Merkin Concert Hall in NYC; the Corcoran Gallery in Washington, D.C.; and the Kravis Center in West Palm Beach. Dr. Kesselman was a top prizewinner at “Citta de Marsala” International Piano Competition in Italy and has performed as a soloist with many orchestras, including the Annapolis Symphony Orchestra and the Israeli Camerata.

Dr. Kesselman received his B.M. degree, cum laude, from S. Rubin Academy of Music in Tel Aviv, and his M.M. and D.M.A. degrees from Peabody Conservatory of Music in Baltimore. His teachers have included Yoheved Kaplinsky, Emanuel Krasovsky and Irina Zaritskaya. Currently, he serves as the Director of the Lucy Moses School and Special Music School at the Kaufman Music Center in Manhattan and curates the popular Tuesday Matinee series at Merkin Concert Hall. Dr. Kesselman serves frequently as a judge in international competitions and auditions, including Concert Artist Guild, New Orleans International Piano Competition, Astral Artists, Virginia Wering international Piano Competition and Boston University. He is also the Founder and Artistic Director of Kaufman Music Center International Youth Piano Competition. Dr. Kesselman is a member of the piano faculty at the Lucy Moses School, and at the Special Music School, New York’s public school for musically gifted students.