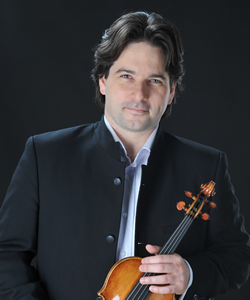 “… Eyal is an exceptional artist, with an original music approach.” Prof. Zakhar Bron

“… a gifted and enthusiastic teacher with a special ability to transmit his ideas to the student” Prof. Igor Ozim

“… he is a marvelous, natural player and a thoughtful, strikingly original observer of violinists and violin playing.” Emil Israel Chudnovsky

Eyal Kless, born in Israel, has performed and taught throughout the world, fast establishing himself a dynamic and versatile musician. He is the founder and 1st violinist of Israel Haydn Quartet, which is now well into a successful seventh season, and is a former member of the Manchester Piano Quartet. Eyal has also performed with artists such as Martin Rosco, Dr. John Oconor, Adrian Brendel , Yair Kless and others.

Eyal moved back to Tel Aviv, Israel in 2010. He is currently teaching at the Buchman Mehta School of Music, Tel Aviv University. He previously taught at the Royal Northern College of music, Chethams School of Music (Manchester, England) and at the Royal Irish Academy of Music (Dublin, Ireland).

Eyal works and performs together with his father Yair Kless. His own and mutual students have won 1st prizes and are laureates of numerous international and national competitions. He conducts lectures (stage fright and technical elements of playing) and seminars as well as master classes and concerts all over the world, in countries such as Taiwan, New Zealand, USA, most of the EU countries and is invited to jury panels of international competitions.

Eyal’s first professional book, “Zen and the Art of Violin Practicing”, is praised by students and professionals alike. His Novel, “Rocca’s Violin”, was published in Israel in 2008.

Eyal’s second and third novels, “The Lost Puzzler” and “The Puzzler’s war” were published, by Harper Collins Voyager (in English) and Blenvalet Random (German) in 2019.

Eyal is represented by the Deborah Harris Literary Agency.

More about Eyal in www.eyalkless.com