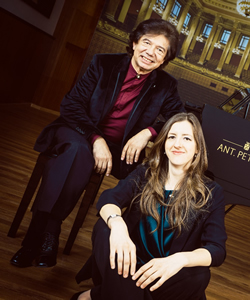 After performing together for over 15 years Anatoly Zatin and Vlada Vassilieva, pianists of Russian origin and Mexican nationality, developed their own, unique concept of the piano duo as stage genre by creating and performing their own arrangements for piano four-hands and two pianos, besides inspiring their exceptional quality and sophisticated style to the classical repertoire.

They have been named Classical-Contemporary Duo of the year by the 2016 Mexican Music Awards in New York, won the 2018 United States International Duo Piano Competition, obtained Silver Medal at the Global Music Awards twice and were nominated for the Hollywood Music in Media Awards for their now iconic two-piano version of El Jarabe Tapatío.