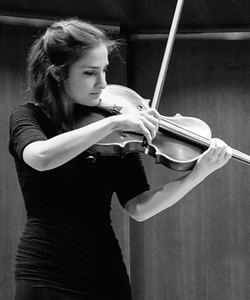 Ms. Solotoff is a regular guest player with ensembles throughout the US and Europe such as Camerata Venia, Hulencourt Symphony Orchestra and Kaleidoscope Ensemble.

In 2008 she won the 1st Prize in the ASTA Solo Competition in California, and was a finalist in the Eastern Music Festival Concerto Competition in 2010. She has performed at festivals such as Pablo Casals Festival de Musique de Chambre, Fontainebleau École D’Art Américaines, The French-Czech Academy of Music, Banff Masterclasses for Strings and Winds, Eastern Music Festival, Idyllwild Summer Chamber Music and YMF National Debut Orchestra Festival.

Ms. Solotoff earned her Bachelor’s degree from The Juilliard School in NYC where she studied with Michael Tree and Masao Kawasaki. While at Juilliard, she is proud to have been a member of the New Juilliard Ensemble which focused entirely on premiering new music and collaborating with emerging composers. She went on to earn her Masters from the Haute École de Musique de Genève in Switzerland where she studied with Miguel Da Silva. There she was a recipient of the Hans Wilsdorf Foundation Scholarship Award.

Ms. Solotoff has also enjoyed an extensive teaching career in Los Angeles at the Pascale Music Institute. She is a Pascale Method for Beginning Violin certiﬁed teacher. She directs and runs the institute’s innovative ‘Practice Boot Camp’ program. She coaches the Los Angeles Children’s Orchestra, which as a child she had served as its Concertmaster.