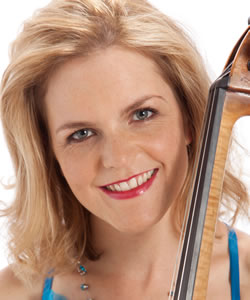 Praised by various critics for her ability to capture the audience through her mature artistic approach, extraordinary musicality and inimitable technique, Anzel Gerber is increasingly performing on internationally renowned stages. As the overall winner of the 2012 IBLA Grand Prize International Music Competition in Sicily, Italy, she will perform with pianist Ben Schoeman in Carnegie Hall, New York on May 2, 2013.

Anzel Gerber’s art as cellist has been shaped by Russia’s most prominent teachers and soloists, starting with three years under Alexander Fedortchenko followed by two years with Alexander Kniazev at the Moscow State Conservatory. Later, as part of her PhD in Music Performance at the University of London, she pursued her studies under Russia’s legendary cello teacher, Natalia Shakhovskaya.

She had her first lessons at the age of four, in Pretoria, South Africa. Her first teacher was Glenda Piek, followed later by Marian Lewin, who was then South Africa’s foremost cello teacher. Under Lewin’s tutelage she won several music competitions and scholarships, which enabled her to further her studies in Oviedo, Spain, with Alexander Fedortchenko. That set her firmly on the path to the Moscow State Conservatory.

Her most recent commercial CD recording (in 2010) features sonatas by Schubert (“Arpeggione”), Debussy and Shostakovich with the Japanese pianist Rinko Hama. She has also collaborated with pianists Manolis Neophytou, Evgeny Talisman, Aleksander Szram and Anneke Lamont, and with organist Herman Jordaan.  The renowned winner of the Queen Elisabeth Composition Competition, Hendrik Hofmeyr, dedicated the Crucifixus for cello and organ to Anzel.

Anzel Gerber regularly performs with the acclaimed pianist Ben Schoeman. The duo received the “Baronessa Constanza Arezzo Giampiccolo di Donnafugata IBLA Award” as top winners of the IBLA Grand Prize International Music Competition in Italy in 2012. In addition, they received a special “Debussy award” for their rendering of the Debussy sonata. The duo will perform in Carnegie Hall, New York in 2013.

Apart from her performance career, Dr Gerber is a dedicated lecturer and researcher. She received her PhD in Music (Performance) from Goldsmiths College, University of London in 2008, with Prof Alexander Ivashkin as supervisor and Prof Natalia Shakhovskaya as co-supervisor. Her doctoral research entitled Critical success factors in cello training was a comparative study on cello training in Germany, Russia, the UK and USA. Her keen interest in the field of gifted music education, served as inspiration for her post-doctoral research entitled Gifted music education: an international perspective, at Temple University, Philadelphia, USA in 2009-2010, with Prof Jeffrey Solow as supervisor. The talent development of gifted young cellists in China, Korea, Japan, Russia, Austria, the UK and USA was investigated. She gave masterclasses at the Beijing Central Music Conservatory and is passionate about teaching. She is a lecturer in cello performance and methodology at the University of Pretoria in South Africa.

Dr. Gerber plays on a cello made by Antonio Gagliano (Napoli ca. 1820), on loan to her from the Maggini Foundation in Switzerland.