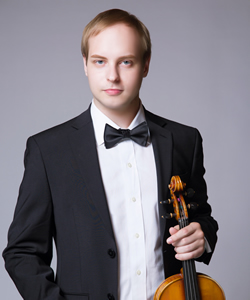 Andrii Isakov was born in Khmelnytsky, Ukraine where he started his violin studies at the age of 6. He studied with Raisa Rashyna and at the age of 14 was accepted to the Special Music School for Talented Children “Solomia Krushelnytska” in Lviv where he continued his violin studies with Oksana Tsap. After graduating from the school, Andrii went to Zagreb, Croatia for one year, to study with the concertmaster of Zagreb National Symphony Orchestra Orest Shourgot. In 2012 Andrii moved to the US to study with Professor Mark Lakirovich at the Chicago College for Performing Arts, Roosevelt University as a full-scholarship student. He graduated from CCPA in winter of 2017. Andrii received his Master of Music at CCM in Cincinnati studying with Professor Kurt Sassmannshaus. Currently, Andrii is pursuing his DMA at CCM as a full-scholarship student.

Andrii has performed numerous solo recitals and as chamber musician in Italy, Germany, Poland, Croatia, Ukraine, and the United States. He appeared as soloist with the National Ukrainian Philharmonic Orchestra (Kyiv, Ukraine), Lviv Symphony Orchestra, Khmelnytskyi Symphony Orchestra, Cremona Festival Orchestra (Cremona, Italy), and other ensembles. In addition, Andrii performed Poeme by Chausson with CCM Philharmonia Orchestra as a winner of the concerto competition. Andrii was also concertmaster of the Philharmonia Orchestra at CCM.