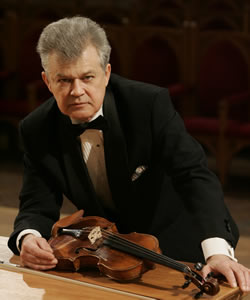 Violinist Anatoly Bazhenov possesses all highest awards of the Ukraine – he is the State Prizewinner named after T. Shevchenko, the People’s Artist of Ukraine, Professor of the National Academy of Music.

A. Bazhenov performed more than 3000 concerts as a very popular soloist and chamber musician, he is the first violinist of the National String Quartet named after M. Lysenko for more than 40 years. He plays as the guest concertmaster of chamber & symphony orchestras, and for the past 20 years he is a concertmaster of international symphony orchestra “Tekfen Philharmonic”.

Mr. Bazhenov was born in 1945 in Dnipropetrovsk, Ukraine, where he began violin studies with Professor M. Liberman. In 1968 he graduated from Moscow Conservatory, where he worked with professor B. Belenkij, and moved to Kiev to complete his Doctoral studies at Kiev Conservatory with professor O. Kryssa. Brilliant start of his career was in 1969. He performed the Prokofiev’s 2nd Violin Concerto with the St. Petersburg Philharmonic Symphony Orchestra conducted by Yuri Temirkanov in the finals of the All Union Violin Competition. Later he was awarded the special prize in 1972 “Prague Spring” International Violin Competition. Since that time, for almost 50 years, his permanent partner has been his wife, the pianist Naida Magomedbekova.

Mr. Bazhenov has made radio, LP, CD and TV recordings, and has been released on such labels as “Melodiya”,”Amati” and “ETCETERA”.

Mr. Bazhenov plays a Ferdinando Gagliano violin made in 1739.