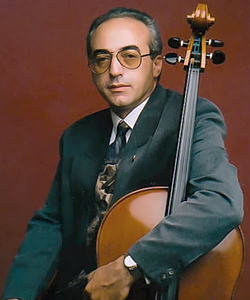 Alexander Kaganovsky was born in Kiev, Ukraine. He had his first music lessons at the age of five. Only a few years later he played as a soloist for the first time, and at the age of 16 he won the Ukraine Competition. He continued his studies at the Tel-Aviv Rubin Academy of Music with Prof. Uzi Wiesel and won first prize at the Academy’s Competition. In 1985 he was awarded first prize in the Israel Broadcasting competition, and since that year he has also been a member of the acclaimed Israel String Quartet. Since 1998 Alexander Kaganovsky is living in Switzerland.

He has given Masterclasses in Roladseck (Germany), Bratislava (Slovakia), in the UNESCO Masterclasses under guidance of Yehudi Menuchin, at the European MusicAcademy in Schengen (Luxemburg), France, Israel, Russia, Japan, Switzerland, and Ukraine .

His wide repertoire ranges from Baroque to contemporary music, and some pieces have been especially written for him. Kaganovsky has made many recordings for radio, TV and Damon them CD’s Recorded by ZPEX and J.O.D Japan, and Kaganovsky Sound (Swiss).