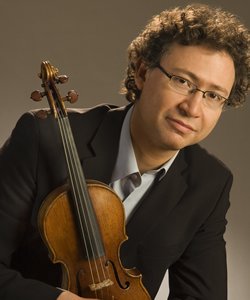 Mr. Velinzon’s solo highlights include critically acclaimed performances of the Brahms Violin Concerto with the Seattle Symphony under the baton of Ludovic Morlot, and the Schnittke Violin Concerto with the Seattle Symphony as well as appearances with University of Washington Symphony Orchestra, Cascade Symphony Orchestra and Oregon Music Festival Orchestra. His concerto appearances in the last few seasons include performances with the Bakersfield Symphony in California and New Philharmonia Orchestra in Massachusetts.

An avid chamber musician, Mr. Velinzon has performed with the Boston Symphony Chamber Players, Seattle Chamber Music Society; in Boston he is a long-standing member of the Walden Chamber Players and a co-founder of the LiveArts string quartet. In New York, he performs frequently with the Jupiter Chamber Players. In 2010 Mr. Velinzon made his critically acclaimed debut at London’s   Wigmore Hall with the Soloists of the London Philharmonic Orchestra.

Mr. Velinzon is on faculty at the Longy School of Music in Boston, where he has a violin studio, as well as an orchestral repertoire course that he designed. He has given numerous masterclasses around the US. He has coached chamber music and taught private lessons at Tanglewood music center, MIT and the New World Symphony Orchestra.  He served as an affiliate professor at the University of Washington between 2014 and 2017.

Born in St. Petersburg, Russia, Alexander Velinzon graduated from the Leningrad School for Gifted Children. After moving to the United States, he studied with renowned pedagogue Dorothy DeLay at The Juilliard School, where he earned his bachelor’s and master’s degrees.